I often go on walks in the evening and sometimes the sun sets before I get back home.  Because there are a lot of rattlesnakes where I live, I often worry I’m going to step on one in the dark. But I sometimes see them during the day too. So are rattlesnakes active at night?

Here is what I found:

Yes, rattlesnakes will move about and hunt at night time, if the temperature is consistently about 65 – 70 degrees Fahrenheit or higher.  If the temperature falls much below this then they will likely take shelter until the next day when the sun comes out and warms things up.

But that’s just a quick snapshot of rattlesnakes and nighttime behavior.

So in this article, we’re taking an in-depth look into the world of rattlesnakes, when and why they are active, where you’re most likely to find them, and how to avoid them.

Let’s get into it!

Arizona Black Rattlesnakes in ambush late at night in a canyon north of Phoenix. This species, like others, may become entirely nocturnal for the hot months of the year. pic.twitter.com/N9GeBsHHcm

Why are rattlesnakes sometimes active at night, and other times during the day?

Because rattlesnakes are cold-blooded, they must take shelter whenever it gets too cold or hot. So depending on the weather, they may be active at night, or during the day so they don’t get too hot or too cold.

That is why during cold winter months, they will take shelter in underground dens and hibernate, often with many other rattlesnakes helping to keep each other warm.

All animals need to keep their bodies at certain temperatures in order to function properly.

Some animals like humans and other mammals are able to regulate their temperatures internally, regardless of the outside temperature.

These animals are called endotherms, or “warm-blooded.”

Other animals like rattlesnakes and other reptiles cannot change their body temperature internally.  Instead, they rely on the outside environment to keep their temperature in the proper range.

These animals are called poikilotherms or “cold-blooded.”

This allows them to keep the temperature high enough so that they will not die, even though it is not high enough for them to be active.

During the hot summer months, they will also take shelter during the hottest times of the day, when the temperature is so high that it would kill them.

So they hide underground during the day and come out to hunt when it is cooler, such as evenings and mornings.  If the nighttime temperature is warm enough, they could be active all the way from dusk to dawn.

One last thing to keep in mind.

If you come across a rattlesnake in cool or cold weather, you may see that it is moving slowly or acting sluggish or “sleepy.”

This means that it is too cold to move very quickly, but this doesn’t mean they aren’t dangerous!  Under normal conditions, a rattlesnake can strike a human being faster than we can react.

It might be so fast that we don’t even see the movement clearly!

A study has shown that even when they are moving slowly due to cold, rattlesnakes can still strike faster than most people can react! (source.)

Do rattlesnakes hunt at night?

Yes, rattlesnakes will hunt at night if the temperature is warm enough to allow them to stay active.  Their active temperature range is usually around 65°-70°f degrees on the low end and 85°-90°f on the high end.

Keep in mind that there is no exact rule for when snakes will be active or inactive since the temperature of the environment is always a moving target.

Even if the air temperature is growing cool after the sun has set, the temperature of the ground may still be much high after baking in the sun all day long, and this may allow rattlesnakes to keep slithering along and hunting for small animals.

If the ground is still warm even as the air temperature drops, then rattlesnakes will continue to hunt, since the ground is keeping their bodies warm enough to move quickly enough to catch prey.

Also, a lot of the animals that rattlesnakes like to hunt are mostly active at night, such as mice and rats.

If you are also moving about your yard at night or taking a night walk in nature then it is a good idea to have a flashlight so you can see where you’re putting your feet and hands.

Came within 12 inches of stepping on this rattlesnake as it was getting darker out last night… remember to stay safe out there. Glad to have seen it and heard it at the last second! pic.twitter.com/6tywLMDDIE

What time of year are rattlesnakes most active?

Keep in mind that seasonal temperatures fluctuate, and that is especially true in recent times when weather patterns are becoming highly unusual across North America.

Overall, temperatures are growing warmer across the continent, which means that rattlesnakes may be active earlier in the year than they were in past times.

For the same reason, rattlers may stay active later in the year too.

In my area, we had an unusually warm and sunny February this year.  I didn’t encounter any rattlesnakes during that time, but as the warm weather continued I started being more cautious on my nature walks, in case any rattlers had emerged early because of the high temperatures.

The weather ended up growing cold and rainy again (our normal winter weather) so maybe the snakes knew to stay in hibernation a while longer?

Because weather patterns are growing warmer, this also means that rattlesnakes may expand their habitat further north on the continent, into places where it was previously too cold for them to live. Canadians who are not used to encountering poisonous snakes of any kind will eventually need to learn basic safety precautions to avoid bites!

It can also mean that the normal habitats of particular species of rattlesnake may move and change.

For example, scientists predict that the canebrake rattlesnake (considered one of the most dangerous in North America due to it’s fang size and high venom yield) may move further west into areas where it has not lived before (source.)

We were talking bout rattlesnakes on the hike last night and I look down and lil dudes just chilling right next to me pic.twitter.com/WMymPCDOWK

Where do rattlesnakes sleep at night?

When rattlesnakes take shelter to sleep, they pick a place where they can hide and feel safe from predators that might harm them such as the burrow tunneled by a squirrel or other small mammal. But Rattlesnakes don’t always sleep at night as people do.

They might be wide awake at night and hunting for food and take shelter during the daytime when temperatures are too hot.

Their sleep schedule can change through the seasons since they will hunt whenever the temperature and other conditions are favorable, and they take shelter when conditions are not favorable.

Although rattlesnakes don’t have a set sleep schedule like some animals, they do like to find hidden places where they can take shelter and sleep.

Rattlesnakes are known for taking over the burrows of other small animals.

If a ground squirrel or some other rodent has dug a tunnel under the ground, a rattlesnake may decide that it is the perfect home and move in. They may even hunt and eat the original owner!

Rocky outcroppings with lots of cracks and hidden crevices are a perfect place to for rattlesnakes to make dens and take shelter in.

At one of my previous homes where I found the most rattlesnakes, there was just such a rocky outcropping across the street.  It was sheltered by lots of trees where rattlers could stay cool on hot days, but it was also close to open sunny spots where they could warm up in the sunshine if they wanted to.

All of the rocky cracks and crevices formed a perfect little village of shelters where many snakes could live.One of the most important thing to keep in mind about rattlesnakes is they might take shelter underneath something as simple as a piece of wood or a children’s toy left in your yard.

They might even use parts of your home as a shelter.

If you have hidden places under a deck, or in the crawl space under your house, or in piles of rock or wood, these may become the refuge for rattlesnakes.

I have found one underneath the propane tank in my yard and two more that were hidden among a bunch of bicycles that we had parked on the side of our house, underneath a high deck.

Rattlesnakes may even come inside your home under certain circumstances, especially a garage, mudroom or work shed that has a more constant temperature and lots of places to hide.

If you have lots of rattlesnakes in your area then it’s a good idea to stay aware and cautious when picking things up from the floor of these kinds of places.

I even train myself to expect a rattlesnake so that I stay extra aware. 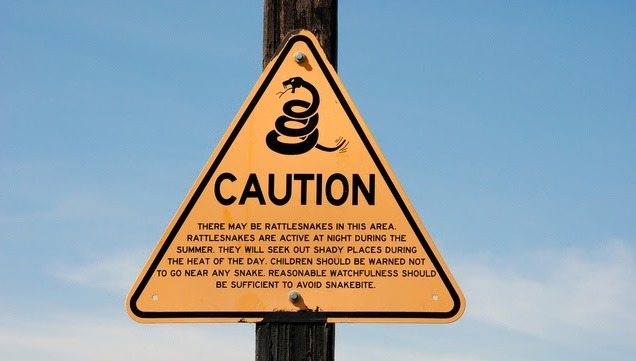 What is the best time of day to avoid snakes?

The best time of day (or night) to avoid rattlesnakes is whenever temperatures are in the moderate range of  65°-70°F degrees on the low end to 85°-90°f on the high end.

Unfortunately, this is the same temperature range that we humans like to be active in!

If seasonal temperatures are in this range for a prolonged period then rattlesnakes are likely to be active and it is important to practice basic caution.

It may not always be possible to avoid snakes during the day.

Keep in mind that most rattlesnake bites come from placing a hand or foot on or near a rattlesnake.  That’s why it’s important to practice some basic rules of safety around your home or anywhere that is known rattlesnake territory:

The Most Venomous Rattlesnake in the World!

My research taught me that rattlesnakes are definitely active at night whenever nighttime temperatures are warm enough to allow their bodies to move quickly and hunt for prey.

If you are walking at night in rattlesnake territory, it is a good idea to bring a flashlight and shine it on the ground in front of you as you walk so you can avoid stepping on a rattlesnake.

This includes walking around your home or on a road at night since rattlesnakes can be active in those areas just as much as grassy fields and forests.