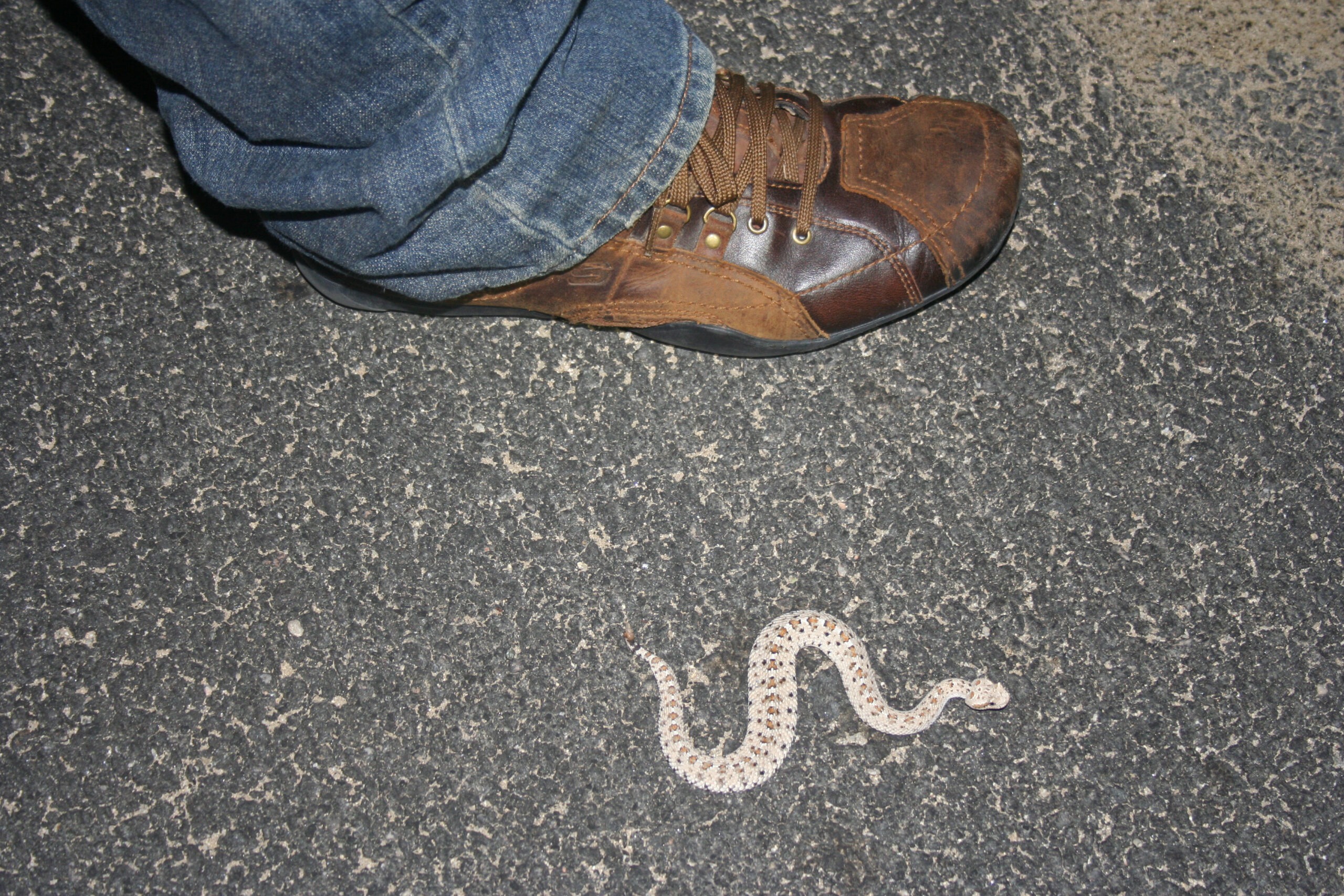 Rattlesnakes are animals that many people avoid, but they are fascinating. They grow up to 8 feet long, depending on the species, but how long are baby rattlesnakes?

All rattlesnakes are dangerous and should be avoided at all costs, but identifying a baby rattlesnake is a useful skill to have.

Rattlesnakes finish growing 3 to 4 years after they are born, but they do most of their growing during the first year of their life. They grow to be 3-5 feet long, but rattlesnakes longer than 6 feet long have been found in the past.

Rattlesnakes shed about twice a year, even after they are finished growing. Baby rattlesnakes typically shed their skin three times a year because of how quickly they grow.

All rattlesnakes are venomous and should be avoided at all costs. The rattle at the end of their tail is what gives the rattlesnake its name, and makes a rattling, or buzzing sound.

“The rattle is composed of a series of hollow, interlocked segments made of keratin, which are created by modifying the scales that cover the tip of the tail.”

When the interlocking segments of keratin are rubbed together, it makes a rattling sound.

So if you see a snake that you think is a rattlesnake, but it does not seem to have a rattle at the end of its tail, then it may just be a young one. Baby rattlesnakes are still venomous. If you see a very small snake, do not go near it. Even baby rattlesnakes can kill or severely injure humans.

Baby rattlesnakes are typically more aggressive than adult rattlesnakes because they do not have a rattle to warn off predators and feel very vulnerable.

Depending on the species, rattlesnakes are either born with one single rattle segment, which is what you see when you look at the tail of a rattlesnake, or the rattle begins to develop and grow after its first shedding (about two weeks after it is born.)

Because a baby rattlesnake only has one rattle segment, you will not hear a rattling sound, even if you see it shake its tail at you.

But how can you determine how old a rattlesnake is without having been there when it hatched?

Typically, a rattlesnake has two or three rattle segments on its tail for each year of its life. Rattlesnakes live an average of 15 to 25 years, so you may see an older rattlesnake with a very large rattle.

There are 32 different species of rattlesnake, and about 83 different subspecies. That is a lot of different rattlesnakes, and we personally do not want to run into any of them!

The Eastern Diamondback rattlesnake is commonly found in the southeastern United States. It is one of the heaviest venomous snakes in America and is the largest rattlesnake species that has been found. At the time of birth, these baby snakes are around 15 inches long and similar to adults in color and pattern.

A newborn’s tail ends in a smooth “button,” which will eventually become the rattle. Source

The Crotalus Ruber, otherwise known as the Red Diamond rattlesnake, is most commonly found in southwestern California in the United States, and Baja California in Mexico.

They typically grow to be 2 to 3 feet long, and baby red diamond rattlesnakes are around 10 inches long when they are born. They are an orangish-red color. While its venom is less toxic than many other rattlesnake species, it can still easily kill a human with one bite.

The Northern Pacific Rattlesnake rarely grows more than 36 inches long, so it is not one of the largest species of rattlesnake. It is typically a greenish-brown or greenish-gray color with many dark brown blotches that are surrounded by a lighter color along their back.

The Crotalus Viridis, otherwise known as the Prairie rattlesnake, is native to the western United States, southwestern Canada, and northern Mexico.

They thrive in hot, sandy deserts in the American southwest. The female sidewinders grow larger than the male ones, which is unusual for rattlesnakes since they typically grow to be around the same length. Sidewinders are usually 12 inches long when they are born, and they grow to around 2 feet in length.

One strange thing about them is that they only produce a slight buzzing sound when their tail is rattled. They also have been seen in a wide variety of colors. There is even a pink Pygmy rattlesnake.

The Western Diamondback rattlesnake usually grows to be 3 to 5 feet long, but can grow up to 7 feet long if they live in the right environment.

The Crotalus Horridus, commonly known as the Timber rattlesnake or a timber rattler, is found in eastern areas of North America.

The Crotalus Lepidus Klauberi, commonly known as the Banded Rock rattlesnake, is commonly found in the southwestern United States and northern Mexico. It is one of the smaller rattlesnake species found in the U.S. and rarely grows to lengths longer than 2 feet. Baby-banded rock rattlesnakes are typically 8 inches long when they are born.

The Crotalus Pricei, commonly known as the Twin-Spotted rattlesnake, is the smallest rattlesnake in the U.S. It often seems to be in poor condition when observed in the wild, but many scientists do not know the exact reason.

The Crotalus Molossus, commonly known as the black-tailed rattlesnake, is found in the southwestern United States and Mexico.

The tail is completely black, hence the name, and the species is distinguished by a dark band between the eyes and a diagonal dark stripe from the eye to the corner of the mouth. Running down the length of the body is a series of darker vertical crossbands. They grow to be an average of 42 inches long, so they are a medium-length species of rattlesnake.

The babies are typically 6 inches long when they are born, and the adult females tend to be longer and thicker than the males. The bodies range in color from olive-gray, greenish-yellow, to reddish-brown.

These snakes are most brightly colors, and have a reddish/brown hue. They also have broad striped patterns across their bodies, which are darker than the rest of their scales. Baby Southern Cantils tend to be more lightly colored than adults, and some even appear to be bright red. Source

If you see any size of rattlesnake, even a small one, leave it alone and get away from it.

Freeze as soon as you spot it so you don’t provoke an attack. Even a newly hatched rattlesnake is venomous and can potentially kill a human. Newborn rattlesnakes are even more aggressive than adult rattlesnakes because they are more afraid of predators.

If a rattlesnake is curled up and minding its own business, let it be and try to avoid it. It will probably pass you by. If you do not bother it, it shouldn’t bother you. It sees you as a predator and will do whatever it can to protect itself. If it is curled up in a tight ball, it may be sleeping and will not bother you unless you disturb it and wake it up.

Just walk away and protect yourself and other people that may be nearby. If you feel the need to remove the snake from the area, call a snake wrangler or local animal control and have them safely remove the rattlesnake.

Rattlesnakes are typically found in the wild, not in captivity.

Pet stores do not sell rattlesnakes because of the danger that they pose to both employees and customers. If you really want a pet rattlesnake (which we strongly do not recommend,) some breeders will sell a rattlesnake to you as a pet.

However, you will need to have the correct equipment to keep both the rattlesnake and other humans safe before you can purchase it and bring it home.

link to How Fast Do Baby Rattlesnakes Grow? (Time to full-size)

There are lots of cute babies in the animal kingdom, but one baby we don't want to mess with is young rattlesnakes. They are just as poisonous as adult rattlesnakes but deceptively small. But is that...

Continue Reading
link to If You Find a Baby Rattlesnake Are There More? (avg litter)