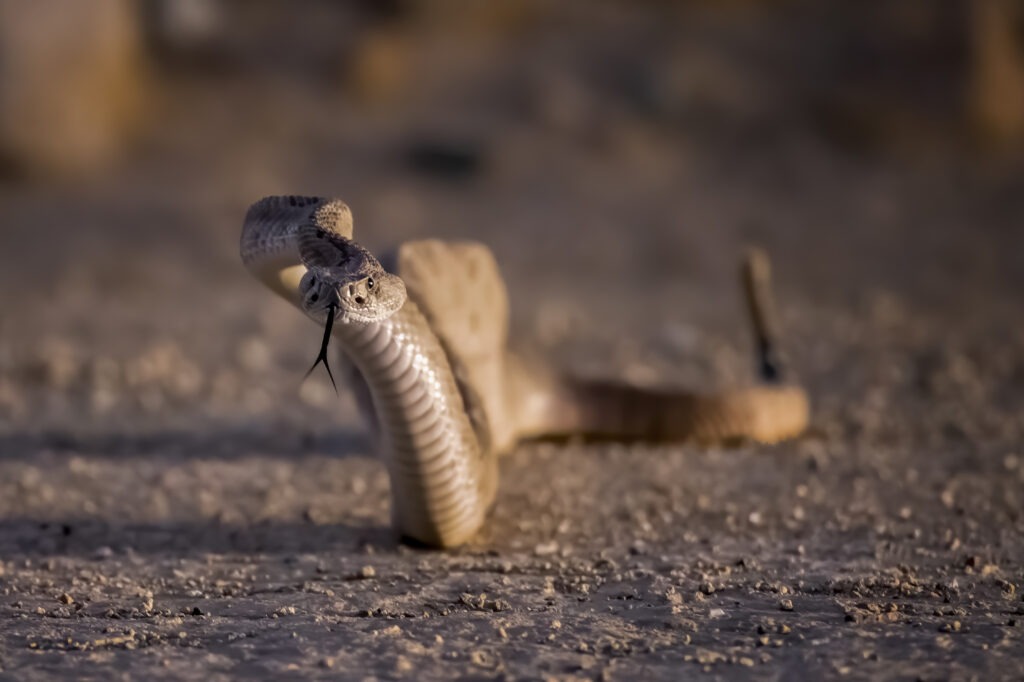 Rattlesnakes should always be avoided, and they’ll usually leave you alone if you don’t bother them. But their habits can be confusing. Are they nocturnal? Let’s answer the question do rattlesnakes come out at night or day?

Here’s what I’ve observed where I live:

Rattlesnakes come out when the temperature is 70 to 90 degrees F. This means that in the spring and summertime you will see them in the early morning or late afternoon. Though they are not nocturnal, they do tend to be more active at night when daytime temperatures greatly exceed 80 degrees F.

In most areas rattlesnakes are not found at all during wintertime, except perhaps for far southern states that reach temperatures of 70 degrees F or more during the winter.

A rattlesnake’s primary goal as they move around is to regulate their body temperature. Rattlesnakes are much like us humans. They enjoy the same type of temperatures that we do. Just like you or me, rattlesnakes want to come out and play in warmer weather.

I have put some information together that will help you learn more about these fascinating creatures.

Rattlesnakes can survive in many different conditions, but you are most likely to find them in areas that have plenty of cover.

Rocky areas tend to be commonplace for rattlesnakes as they can move in and out of covered areas. Although most rattlesnakes have very few requirements for their habitat, there are some species of rattlesnakes that require more specific conditions for survival.

You will find most rattlesnakes in rocky, mountainous areas, but some other areas you may find them are in prairies, marshes, deserts, and forests. Unfortunately, their ability to adapt to various conditions means that you may see rattlesnakes pretty much anywhere you might live.

Despite feeling most comfortable in warmer weather, rattlesnakes can survive for a brief time in freezing weather if they have shelter. (Source)

Where are Rattlesnakes Found?

We talked about what kind of conditions you can find them in, but where have rattlesnakes actually been found?

Rattlesnakes can be found in almost every state in the U.S. However, the types of rattlesnakes you find will vary from state to state. Here are a few different species and where you will most likely find them: (Source)

There are even more kinds of rattlesnakes that can be found in the United States, however, the species listed above are some of the most common.

What Are the Most Common Species of Rattlesnake?

I mentioned a few species above and where they can be found in the United States, but I also want to explain more about these types of rattlesnakes and identify some of the characteristics they have.

What Do Rattlesnakes Eat?

Rattlesnakes are predators and what they eat varies depending on the species. However, there is some standard prey that most rattlesnakes have in common.

Most rattlesnakes will eat:

Rattlesnakes even eat other smaller rattlesnakes and other reptiles. (Source)

Rattlesnakes are ambush predators, which means they lie in wait for their prey to pass by. When the prey animal is close enough, they attack.

Rattlesnakes also have heat sensors in between their nostrils that help them sense when there is prey nearby. This makes them a very dangerous predator because they can hunt during the day and night.

Unlike constrictor snakes, rattlesnakes do not strangle their prey. Instead, they lash out and let their highly poisonous venom do the rest of the work.

Rattlesnakes also do not need a lot of water to survive. They only need to drink the equivalent of their body weight in water each year to survive.

How Long Do Rattlesnakes Live?

An average rattlesnake will live anywhere from 10 to 25 years, with 19 years being the most typical. (Source)

This depends on where they live and the conditions in which they are kept. It has been said that a rattlesnake that is held in captivity and is well cared for can actually live much longer than 25 years.

As you may already know, rattlesnakes can be very scary.

Rattlesnakes have a defense mechanism they use to warn predators to back away: their rattles. A general safety tip if you are out hiking or camping and you hear their rattling is to remain calm. It is a natural reaction for most people to become afraid, but if you hear this rattling it is best to stop and take a look around you to determine where the sound is coming from.

This will help you know which direction you should move. (Source)

Rattlesnakes are generally very timid animals and the only reason they rattle and hiss is to warn others to stay away from them. Many rattlesnakes will not actually attack you unless you continue to provoke them or threaten their young. The rattle is meant to tell us to get away. If you follow the snake’s warning and back away, you can avoid being bitten.

Also, if you are going to an area with a lot of rattlesnakes and you are worried, consider wearing long pants and some boots that will provide you with some protection if you were to get bit.

If you have found a rattlesnake somewhere near your house, it is best not to mess with it. Instead, you should contact a professional such as my friends at Expert Snake Removal to help you with this issue.

How Dangerous Are Rattlesnakes?

According to the United States Center for Disease Control, less than 1 percent of those who are bitten by a venomous snake (including rattlesnakes) actually die from that bite.

The probability of you surviving one of these bites is also much higher when you seek medical treatment immediately after the bite occurs.

The venom of a rattlesnake is produced by the rattlesnake to kill prey out in the wild. Fortunately for you and me, rattlesnakes’ main prey is smaller animals and we don’t really fit into that criteria.

Many rattlesnakes have venom that can paralyze their prey to allow the snake to catch and eat them. This makes it much more common for us to be seriously injured rather than die from a rattlesnake bite.

The CDC also reports that between 10 and 44 percent of people who are bitten by venomous snakes suffer lifelong injuries such as the loss of a finger.

What Should I Do if I am Bitten by a Rattlesnake?

What if you were already bitten by a rattlesnake? What should you do?

Well, the honest answer is that you need to get medical attention as soon as possible. Even if you believe that the snake that bit you was not a venomous one, it’s always better to be safe than sorry. The best idea is to get help as soon as you can.

Oftentimes these incidents do not happen while you are anywhere near a hospital. Therefore, it is important to know a few things that the CDC suggests to help you until you can get to medical professionals.

You may have seen people suck out venom in the movies, but please do not do this!

It does not work and you may get yourself in more trouble by doing this. You should also not wait for symptoms to set in before you seek medical attention. You may feel fine and like it’s just a small bite, but if you wait for symptoms to begin to show, it may already be too late.

Do not take anything to try and medicate yourself.

This includes ibuprofen, Tylenol, and even alcohol. In this situation, First Aid is best done by a medical professional. You may think that the tourniquet skills you learned as a boy scout are enough, but doing those things can potentially make the bite worse.

link to What Time of Year Are Rattlesnakes Most Aggressive?

During certain parts of the year, rattlesnakes are believed to be more dangerous than at other times. While one should always be cautious of snakes in the wild, many are left wondering what time of...

Continue Reading
link to How Long Do Rattlesnakes Live? (By region and type)