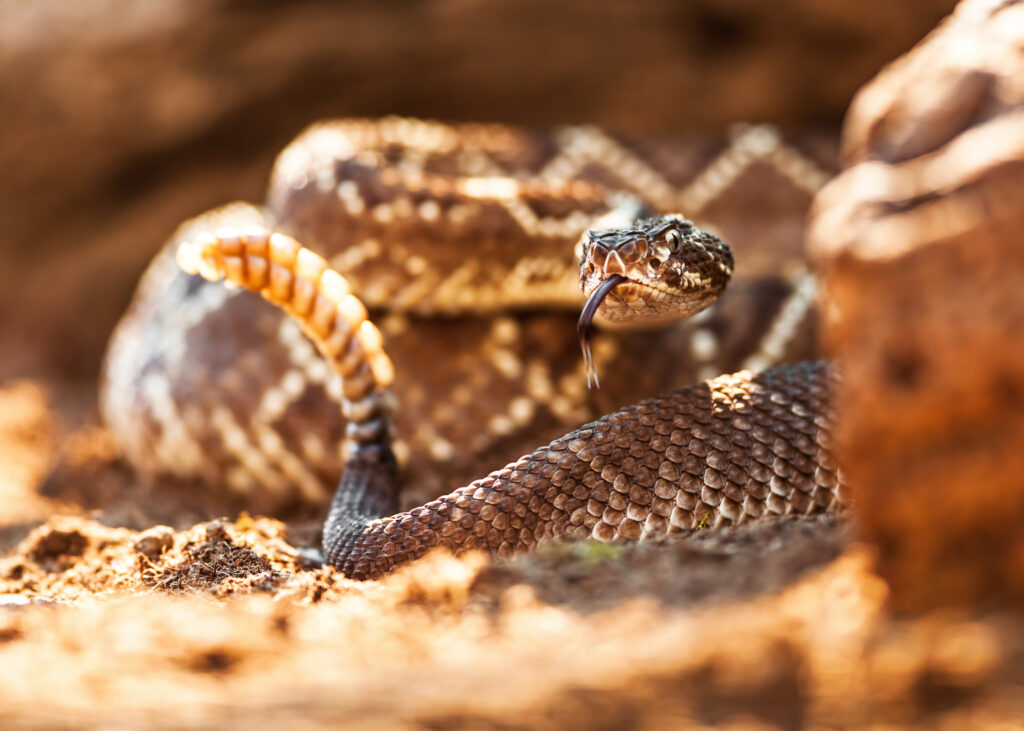 Rattlesnakes ought not to be trifled with, that’s for sure. Many of us are used to the idea of a coiled snake meaning danger, but can a rattlesnake strike if not coiled?

As a general rule, rattlesnakes can strike even if they are not coiled, and when they are coiled, it does not always mean they are ready to strike. Snakes are not often stretched out because it is a riskier position. Coiling up decreases their vulnerability to any potential predators.

Coiled or not, rattlesnakes demand a certain level of respect and caution. Here are a few things to know if a rattler ever crosses your path!

What is a rattlesnake’s striking distance?

So how close is too close when you’re dealing with rattlesnakes?

Most rattlesnakes have a striking distance that’s between 1/3 and 1/2 of their body length (so a four-foot snake could strike up to two feet).

Obviously, most people will get away as fast as possible the moment they glimpse a rattlesnake, though curious thrill-seekers might caution a step or two closer.

Keep in mind that it might be difficult to judge the length of a snake if it’s coiled. However, as mentioned above, it’s a common misconception that a snake has to be coiled before it strikes. Even fully stretched out snakes can lash out, so keep your distance.

As venomous snakes go, rattlesnakes are among some of the fastest striking.

They can lunge forward half of a foot in only 70 milliseconds (that’s 0.07 seconds!). This is literally faster than the blink of an eye. Yikes. As mentioned before, snakes can strike up to half their body length, but this is often difficult to measure, mostly because the snake’s size and the surrounding terrain can impact the snake’s strike.

This being the case, the wisest thing you can do when you have encountered a rattlesnake is to leave it alone.

Now let’s talk about the most obvious, pressing question: what do I do when I encounter a rattlesnake? This is always a scary experience, but there are ways to get away unscathed. Here’s what you ought to know.

Rattlesnakes can be found almost anywhere in the United States (though they’re most common in the southwest) as well as in parts of Mexico, South America, and Central America. It’s easy to think that they only appear in the desert, but their habitats can range anywhere from grasslands, to deserts, to swamps.

You could very easily run into one when you’re camping, hiking, going off-roading, or any other outdoor activity.

To be prepared for that possibility, you should pack and dress accordingly. Wear long pants and sturdy boots, the thicker the better. It is also a good practice not to go hiking in rattlesnake country alone. If you did happen to be bitten by a rattlesnake, it would be far better to have somebody with you to treat your injury and/or find help.

Two heads are always better than one, especially when dealing with dangerous wildlife.

It is also advisable not to stray from the beaten path. Rattlesnakes are great at camouflaging themselves; brush and dead grass provide ideal hiding places for snakes, so avoid those places as often as you can. If you come across a snake that appears to be dead, just keep moving.

Even if you are positive it’s dead, it would be better if you did not take the risk. Snakes often maintain deathly still to lure their prey into a false sense of security before striking. It is easy for anyone to be fooled by it.

You should always check for snakes before picking up rocks, pieces of firewood, or anything similar. As mentioned before, they are excellent hiders so it’s better to be safe than sorry.

Exercising caution is a must, but it is also important to understand that rattlesnakes must be respected.

Rattlesnakes will usually only strike if they feel you are a threat to their wellbeing, so give them their space and you should be able to walk away just fine. When encountering rattlesnakes, you should move very slowly. If it does not rattle, it probably does not feel scared enough to strike.

Just stay where you are and give it a chance to get out of the way. If it has raised itself and is rattling, stop moving immediately (if at all possible, remain at least five feet away). Back away slowly and most importantly, remain calm. Panicking won’t do you any favors.

Do not poke at the snake or try to throw anything at it; this will only increase the likelihood of being bitten.

If you can’t see the snake but can hear it, don’t panic or jump around, as sudden movement could instigate a strike. Staying as still as possible, look carefully around for it.

Exercise extreme caution! You don’t want to move around too much or you’ll risk stepping on it and will most certainly be bitten. Once you have located the snake, either stay still and allow it to move or else start to back away slowly.

If you aren’t sure whether you have indeed encountered a rattlesnake or not, the best course of action would be to treat it as one and get away from it carefully.

How to treat a rattlesnake bite 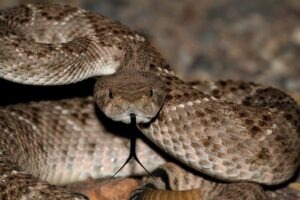 If you do happen to be bitten, try your best to remain as calm as possible. Don’t hyperventilate or run or do anything to accelerate the spread of the venom.

Symptoms could start to appear moments after the bite or could be delayed until hours later. Symptoms include pain, bleeding, sweating, lightheadedness, nausea/vomiting, and swelling of the bitten area. If you are in a position to call 911 and/or poison control, do that right away.

Until help comes, make sure you put as much distance as possible between you and the snake to avoid being attacked again.

Keep the affected area below the level of your heart (this will slow the venomous spread). You ought to remove any tight clothing or jewelry before the swelling gets bad.

It is a good idea to let the wound bleed some.

This will allow some of the venom to leave your system until help arrives. Try to remember what the snake looked like so your medical team can quickly identify the correct antivenom. Place a clean bandage over the wound and stay still. Most importantly, remain calm!

Doing so will greatly increase your chances of being helped before the venom spreads too far.