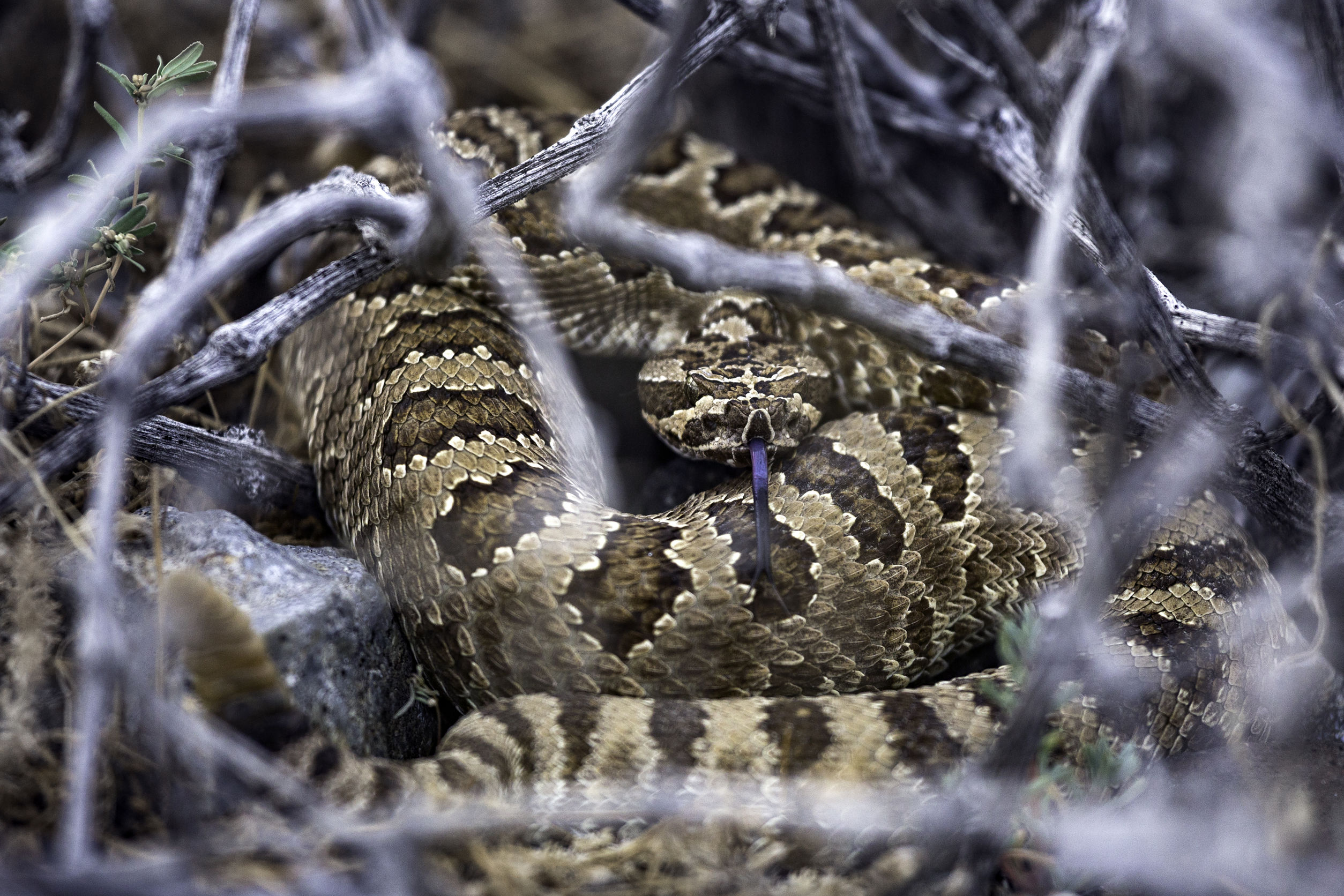 Rattlesnakes are often found in rocks, shrubs, and other low areas. But since other snake species can sometimes be found in trees, some hikers might be wondering do rattlesnakes climb trees?

Although it is uncommon, rattlesnakes do have the ability to climb trees. Through the use of protrusions and rough-textured areas, a rattlesnake is able to undulate its body up into the branches of a tree as long as its bark is rough.

Rattlesnakes do not have the ability, however, to climb up smooth surfaces.

Knowing how a rattlesnake is able to climb something is one of the biggest things we’ll explore.

Why Would a Rattlesnake Climb a Tree?

The biggest reason behind rattlesnakes climbing a tree has to do with diet. Rattlesnakes rely on small rodents, insects, birds, and other reptiles to comprise their dietary intake. And if those are not readily found on the ground, but are in trees, a rattlesnake may try to climb to reach them.

No matter the varying environment in which rattlesnakes can be found, the animals that fall under the category of prey can all be found on the ground at some point (except for some birds).

However small rodents and reptiles often climb into tall trees for protection from their predators. Unfortunately for them, rattlesnakes are adept at climbing and so are able to reach the food they want.

As mentioned, rattlesnakes are more likely to be found on the ground than they are up in the branches of a tree. However, this doesn’t mean that it doesn’t occur.

Rattlesnakes tend to be solitary creatures which means that they tend to avoid human beings. Understanding the reasoning behind why these reptiles climb trees will better explain their behavior.

Another explanation for why rattlesnakes climb trees is protection.

Because rattlesnakes are both predators and prey for many species, this creates more vulnerability for them. The species of rattlesnakes that live in more arid environments are more vulnerable to predators such as skunks, weasels, coyotes, and whipsnakes, and thus have a shorter lifespan. Drier climates have fewer plants, so there isn’t as much cover for them to shelter under.

Being in the lower boughs of a tree will help them avoid the reach of a coyote or skunk, giving them more time to escape.

However, rattlesnakes are also prey to crows, ravens, raccoons, and opossums- all of which are perfectly able to climb trees. It is reasonable then to conclude that this is not a primary motive for rattlesnakes climbing trees. Instead, a rattlesnake is much more likely to use its ability to camouflage against its immediate surroundings.

They might leave themselves open to attack if they try to climb trees instead of hiding.

Escaping the heat is another reason for which rattlers can climb into low boughs. Not only are they able to escape some of the heat of the day, they are also able to keep an eye out for any predators that may come their way.

Of course, it is far more likely that they will seek cover under a rock, but being the boughs of trees does provide opportunities for hunting. Additionally, if they’re living in areas that tend to flood, being able to climb does allow the rattlers to avoid some of the effects. 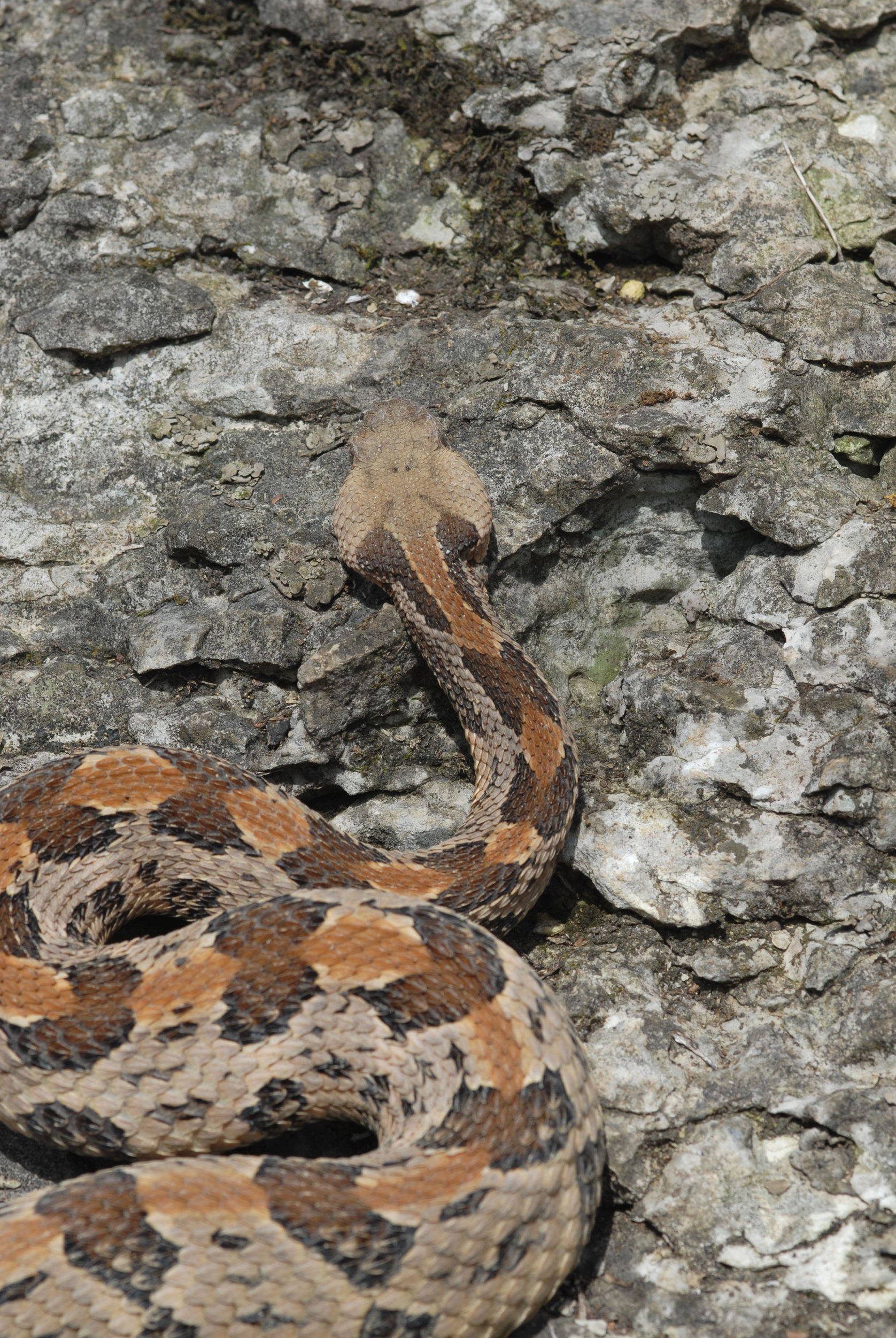 Snakes will move their body in a fashion that is called the “concertina method” or the “accordion method.” This occurs when the snake tenses the muscles of its belly to grip the minute pieces of bark that protrude from the tree.

It will then stretch out its body and use those protrusions of the surface they are climbing to push the rest of their body up.

In climbing a tree, a rattlesnake will brace its back against the bark and then push its head forward.

Essentially, snakes use their body and their surrounding environment to aid them in climbing.

Snakes don’t have slime or mucus that allows them to stick to any surface like snails and slugs.

They will use anything that provides even the slightest bit of stability and support. This can be anything from the rough bark of trees to the jaggedness of stones. It even includes the nearby plants. A rattler will use those as well in order to optimize its ability to climb and stay on that object.

This means that rattlesnakes do not have the ability to climb a smooth three-foot wall surrounding a house. If it doesn’t have anything for them to grip against, they won’t be able to climb. A rattlesnake extends its body to 1/3 or 1/2 of its length. If they are able to pull their body up the wall in this manner, they will.

There has to be enough texture that the snake can use to “grip” against the wall.

If there are any small protrusions near the wall, a rattlesnake will attempt to climb that way. If there is nothing for the snake to use as a support for its body, it will not climb that object.

How High Up Can a Rattlesnake Climb?

The height to which a rattlesnake can climb varies depending on the species. It also varies on the necessity for the rattler to climb in its environment. If it is in an environment where food is more easily accessed, it is less likely that it will take to climbing as a source for food.

The environment that the timber rattlesnake has had to adapt to is different from the black-tailed rattlesnake.

The black-tailed rattlesnake is documented as being able to climb up several feet off the ground. These snakes live more in the southern part of the US, such as Arizona and New Mexico, as well as in Mexico. The habitats that these snakes are exposed to are more arid and flat. There are a few forest habitats that this species can be found in, but the extent to which they climb is far less than that of the timber rattlesnake.

The western diamondback only climbs to a small degree.

Although it can adapt to the different habitats that it lives in (forest, desert, mountainous), it does not have the need to climb frequently. If it does, it is much more likely to scale bushes or shrubs to find the prey that is in the lower boughs.

The trees with the roughest bark that provide the best friction for a rattlesnake to climb include scrub oak and laurel oak trees, mesquite trees, and blue palo verde trees.

The types of trees that rattlesnakes are able to climb are determined by the width of the branches.

In order to climb, a rattler must have two different areas in which it can hold the tree. The smaller rattlers can climb higher because they are lighter and more narrow. The bigger rattlers can only climb to a level in which the tree can still support their weight and bulk.

In order to get a better understanding of what this means, we’re going to use some of the trees that are native to Arizona as a reference. In Arizona, one of the most common trees is the blue palo verde. This tree grows to be about 32 feet tall but has a rather small trunk diameter: 1.5 feet around. 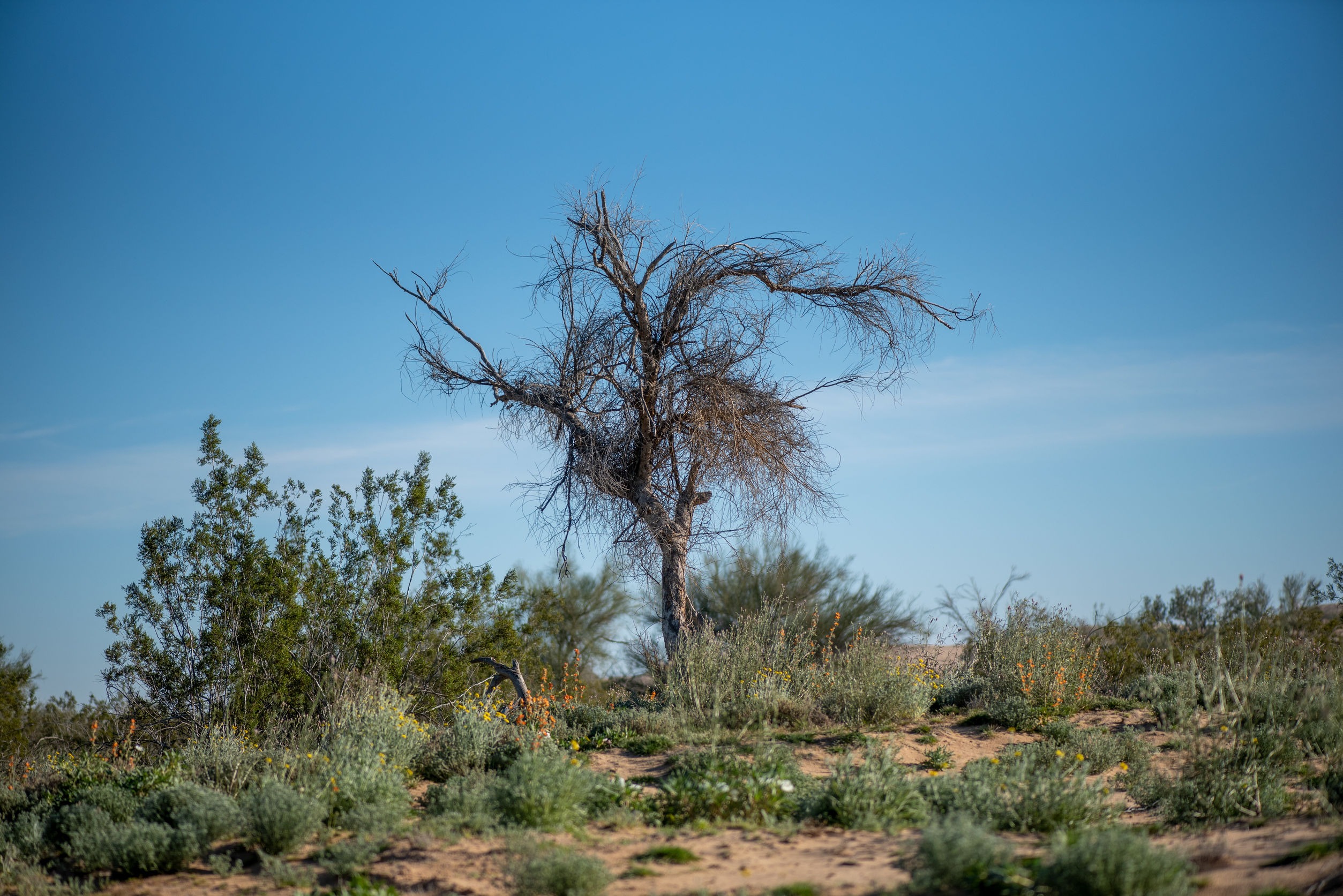 In expanding this to the terms of branch thickness, they will have increasingly smaller diameters as it continues to grow upward. For a rattler to be able to climb a tree such as this, it has to be one of the smaller species.

In Utah, the rattlesnakes live in more mountainous regions.

With the landscape the way it is, it would be more likely to see them in the shrubs and bushes than in the trees. Scrub oak, which commonly grows in the mountains of Utah, would provide enough texture and length for a rattlesnake to be able to climb them. Scrub oak are squat in appearance and are very scraggly.

Seeing rattlesnakes in the deserts in Utah is much more unlikely than in the mountains. This is because the Utah rattlesnakes are more accustomed to living in an ecosystem where the temperatures are more mild and the food sources are plentiful.

In Texas, a common tree for timber rattlesnakes to climb is the laurel oak.

This tree can grow up to 60 feet tall. Because a timber rattlesnake can climb up to 50 feet in this tree suggests that juvenile rattlers are quite adept when it comes to climbing. Mesquite trees are another common place to see the rattlers hanging out, whether they’re hunting or simply cooling off for the day.

However, a rattler’s stability while in a tree is not superb.

If they overextend themselves while hunting, they are likely to fall from their perch. Although the ability to climb when necessary is a useful asset to rattlesnakes, it does provide an explanation for why it not as common to see them in trees. 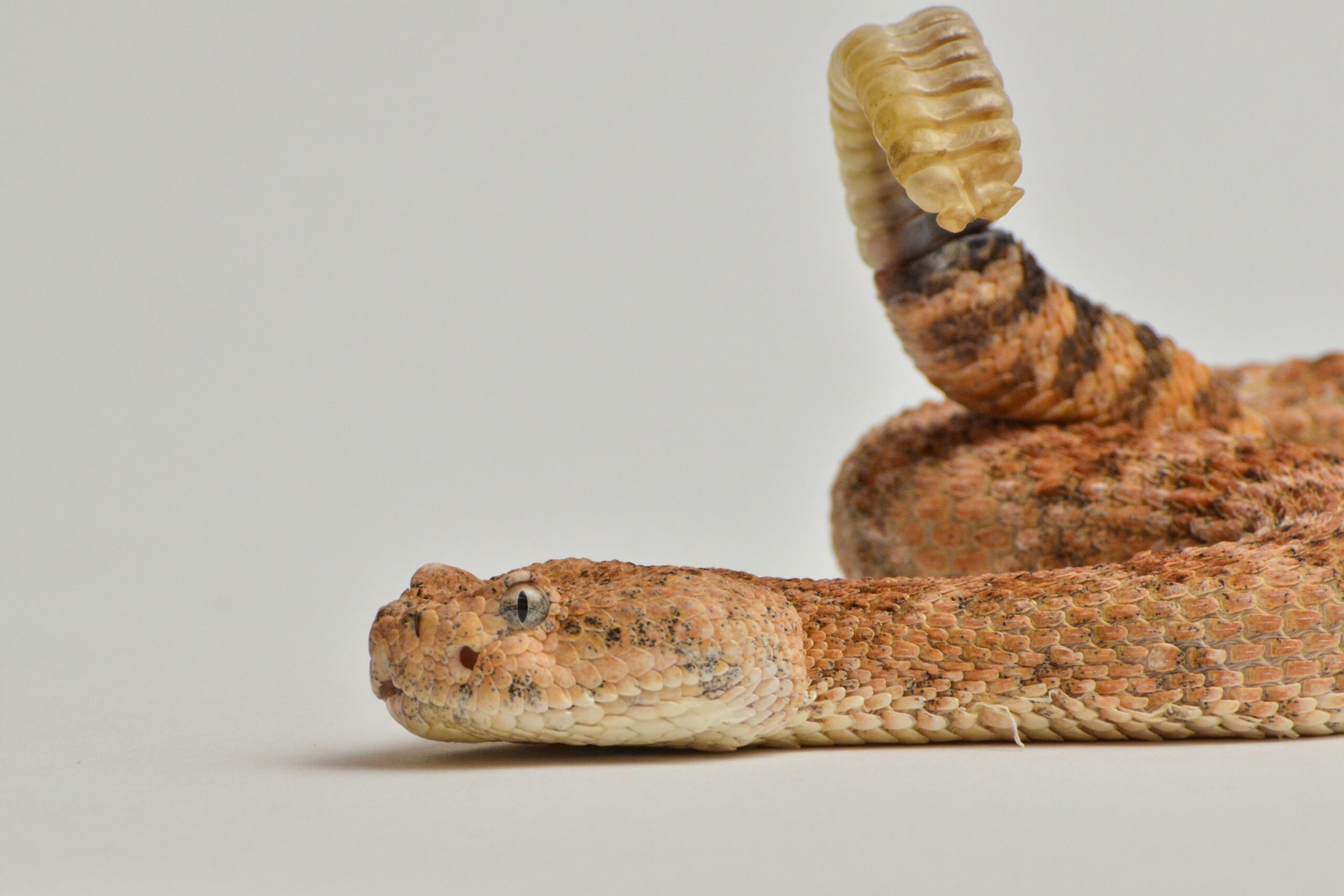 Rattlesnakes are a bit of an anomaly in the snake family because they are not well-suited for climbing. In fact, the body type of the species is completely different from the rest of the snake family. From garter snakes to pythons, their build is very similar.

In terms of skeletal construction, the placement of the backbone and rib cage is the same.

The difference is the expansion of that rib cage. In a snake such as a python, the build creates the typical s-shape. This gives the python a greater ability to maneuver in the water and in the treetops. The same shape accounts for the builds of the smaller snakes that have the ability to maneuver their bodies in such a manner that they can climb even smooth trees.

Instead of having a skeleton that creates a nice s-shape, the skeleton is much more broad. This bulkiness is what causes the restrictions for climbing. Its body is meant to sustain the tough terrains of the mountains and deserts, more than a treetop dwelling. This is what creates such a disparity in a mature rattlesnake’s ability to climb trees for hunting or protection.

Surprisingly, however, rattlesnakes are built for swimming.

They, like the rest of their relatives, are very adept at swimming. The shape of their body plays to their ability because they are able to use tension to their advantage. In this case, the bulk of the rattlesnake does not inhibit its ability.

The distribution of a snake’s weight through its length is what allows it to stay afloat on the water’s surface.

By creating an s-shape with its body, it is able to pull the water in such a way that it propels the snake forward. However, some snakes are more skilled due to their proximity to water but they all do have the ability to utilize surface tension to their advantage.

link to Do Rattlesnakes Go in Swimming Pools?

If you live in an area where rattlesnakes are common, you may be wondering if getting a pool is the right choice for you. Do rattlesnakes go in swimming pools? Here's what I've...

Continue Reading
link to Do Rattlesnakes Come Out at Night or Day? (Seasonal guide)

Rattlesnakes should always be avoided, and they'll usually leave you alone if you don't bother them. But their habits can be confusing. Are they nocturnal? Let's answer the question do rattlesnakes...