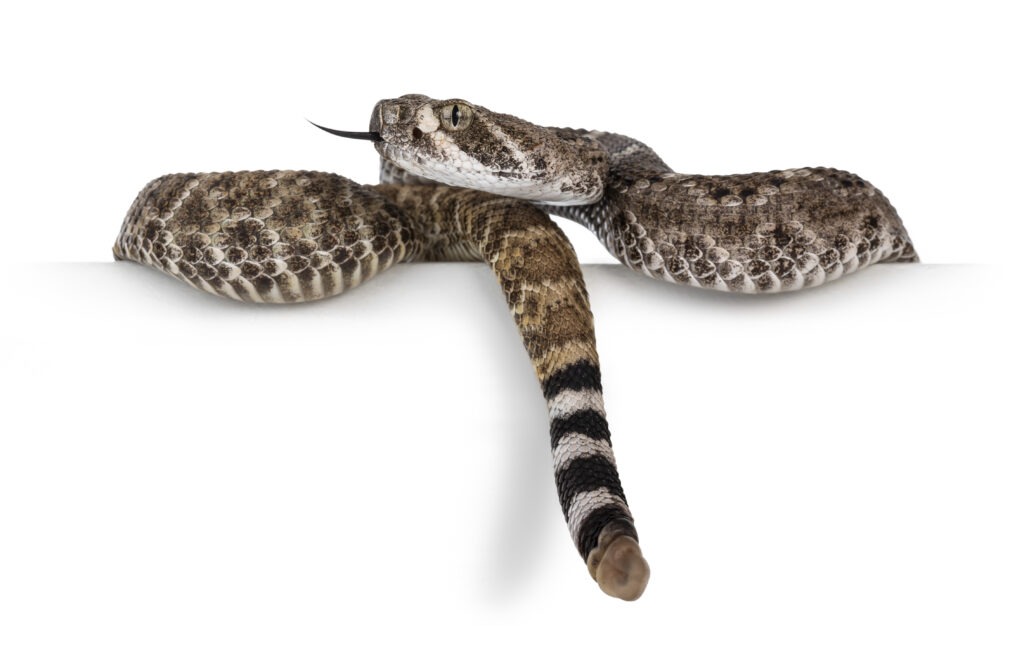 Rattlesnakes are ovoviviparous, meaning that they have live births and the babies come out a little more mature than other snakes that are hatched. But after being born, do baby rattlesnakes stay with their mom?

Baby rattlesnakes will stay with their mother for 1-2 weeks, until their first shedding, and then they will be on their own.

Baby rattlesnakes might be small, but they still should not be underestimated.

They have a natural instinct to wander and explore, but they’re also more aggressive than adults. It’s important to understand their life stages and habits to have better interactions with them. Keep reading to learn more about these small, but powerful snakes!

Usually, a mother rattlesnake will give birth to 6-20 babies. The pregnant mother typically carries the eggs for about 90 days and keeps them incubated. Newly-born rattlesnakes are encased in a clear membrane when they exit the mother’s body.

It’s not an egg but could be mistaken for one by the untrained eye.

The baby rattlesnakes are born with access to the nutrients that the sack yolk has collected while they were forming within the mother’s body.

The membrane must be punctured so that the baby rattler can take its first breath of air. Because of the nutrients that the baby has already taken in, they are naturally independent from birth.

When the baby rattlesnake is born, it has a fresh new scent that predators can sense.

Predators will be attracted to the smell of newborn snakes because they will be easy targets due to their size. They can try to track where these little snakes are so they can eat them. This is where the role of the mother becomes very important.

How a Rattlesnake Mother Protects Her Babies

The mother rattlesnake will offer them protection and try to keep her babies safe from harm.

To provide extra safety, they usually hide in caves or burrows. This is where the mother will give birth to her babies as well. By burrowing or going underground, they are less likely to encounter predators.

It will also provide the mother with a quiet and secluded place where she can be alone and start her contractions, once she’s ready to give birth.

Newborn rattlesnakes are already extremely independent but will stay near their mother for 1-2 weeks.

They are commonly known to be even more aggressive when they are first born as well. The mother may give the baby snake a tap if they try to wander too far. The baby snakes must stay hidden to keep away from large predators. Their skin is also more vulnerable because it is tender and lacks moisture.

It is in the baby rattlesnakes’ nature to explore.

They want to learn what is around them and map out their surroundings. The mother rattlesnake will keep a close eye on them so that they do not get lost within those first 1-2 weeks. She can also protect them, but won’t be able to provide any food.

Rattlesnakes often crowd together and this is to provide themselves and each other with protection and warmth.

Their mother will make sure to protect them and provide them with warmth so that they can grow and shed their first layer.

Because the mother rattlesnake is usually darker in color, she can absorb the sun’s heat more easily and has the ability to give off heat to the babies. This helps keep her little rattlesnakes warm so that their skin develops more.

Once their skin is ready, the baby rattlesnake will experience its first shedding.

The mother rattlesnakes do not nurse their babies.

The mother will then abandon the babies and let them venture out on their own.

A baby rattlesnake will hunt for smaller prey, something that can fit inside of its mouth. Small lizards and rodents are some examples, but they may go after large insects if they’re desperate.

One of the perks of staying with their mother for the first couple of weeks is that she has already found shelter either underground or in a cave for her babies.

Often the babies are already positioned close to different types of rodents that may be sharing the same living space. This is good for the baby rattlesnakes because the co-existing rodents could end up being potential prey for the baby rattlers.

Baby Rattlesnakes Are Small but Mighty!

Just because these rattlesnakes are babies, that doesn’t mean they are helpless.

They are just as dangerous as adult snakes and are sometimes even more aggressive. Because they are small and vulnerable, they are more likely to defend themselves out of fear. They also have potent venom, just like their adult counterparts.

You must be careful when you are in a rattlesnake’s environment.

It is recommended to always wear shoes, especially with thick material. You should also make sure that you have thick, long socks on as well. Rattlesnakes commonly bite at the foot or ankle of humans, so you must make sure that you are covered up in those areas, to prevent harmful situations.

Many people refer to baby rattlesnakes as “cute” but they are still extremely dangerous. The video below will give you an up-close look at what a baby rattlesnake looks like!

The newborn rattlesnakes are equipped with lethal venom from birth.

This venom can keep them safe from any predators that they may cross paths with. Even though they are smaller in size, they have the start of fangs that will also serve as a tool to scare off predators and help them hunt prey.

Rattlesnakes would much rather hunt their own prey than search for dead animals. So if they ever come across food that has already been killed, they will likely keep moving along.

Typically a baby rattlesnake will camouflage itself in grass, bushes, rocks, or sometimes even in a rodent’s burrow.

Once the baby rattler finds a prey worthy of its time and small enough to fit its mouth over, it will strike! The rattlesnake’s fangs have venom that will be released into the prey. Then the rattlesnake waits for the animal to die and will swallow it afterward.

It can find where the dead prey is by using its heat-sensing facial pits above its nostrils and then will feed on it.

Sometimes when a rattlesnake sinks its teeth into its prey, its teeth might stay in the animal.

This is not unusual and the rattlesnake will be perfectly fine. The snake will naturally grow their teeth back. Most rattlesnakes have backup sets of fangs. They typically grow bigger and bigger, so once they have either shed or fallen off they will be replaced with a larger and newer set.

Their fangs feel like a needle and are commonly compared to a curved hypodermic needle.

A baby rattlesnakes’ “rattle”; the pre-button

We know that they are not left without protection after their mother leaves them.

The venom that they have is as strong as some adults. After 1-2 weeks they shed their first layer of skin. This is when more of the rattle will start forming on top of the little rattle that it was born with.

This small rattle is called a pre-button.

After the baby rattlesnake experiences the first layer of shedding, it will lose the pre-button. In other words, it will fall off. It will be replaced with a new segment of its rattle. After each layer of shedding the rattle layers will grow.

It is common for segments of the rattle to break off because they are made of Keratin.

How Dangerous Are Baby Rattlesnakes? Baby rattlesnakes may not have as much venom as a full-grown adult, but their venom is more potent, because of all the nutrients it has taken in from its mother during incubation. Not being able to make an audible rattle at first also makes them more dangerous.

A small rattlesnake can still cause some serious damage! If you are bitten by one, you should reach out and get hospital care to make sure that it is treated well and quickly.

If you ever come in contact with a rattlesnake, hear the sound of their rattle, or spot one somewhere, you should try to stay calm.

Be very quiet and assess the situation before making any possible sudden or harsh movements.

Rattlesnakes sense vibration as well as heat from predators. If they sense that they are in danger they may strike without warning.

You should slowly get as far away as possible from the reptile.

You should also make sure to not elevate the part of your body that was bit by the rattlesnake.

If you did elevate the affected area, this could cause the venom to spread even more and faster. Be sure to stay calm and call for help as soon as possible, so that you can get hospital care.

There is a myth that baby rattlesnakes are even more dangerous than adults because they might not be able to control how much venom they use during an attack.

This is not true. Baby rattlesnakes do not have as much venom as their parents, so they are not more dangerous than adults.

If you were to hear a hiss from a baby rattlesnake you should take it very seriously. They will only have the pre-button of their rattle, so there will not be a noise coming from the end of its tail. But the hiss will serve as a warning to tell you to stay away.

link to Are Baby Rattlesnakes More Poisonous? (Myths vs facts)