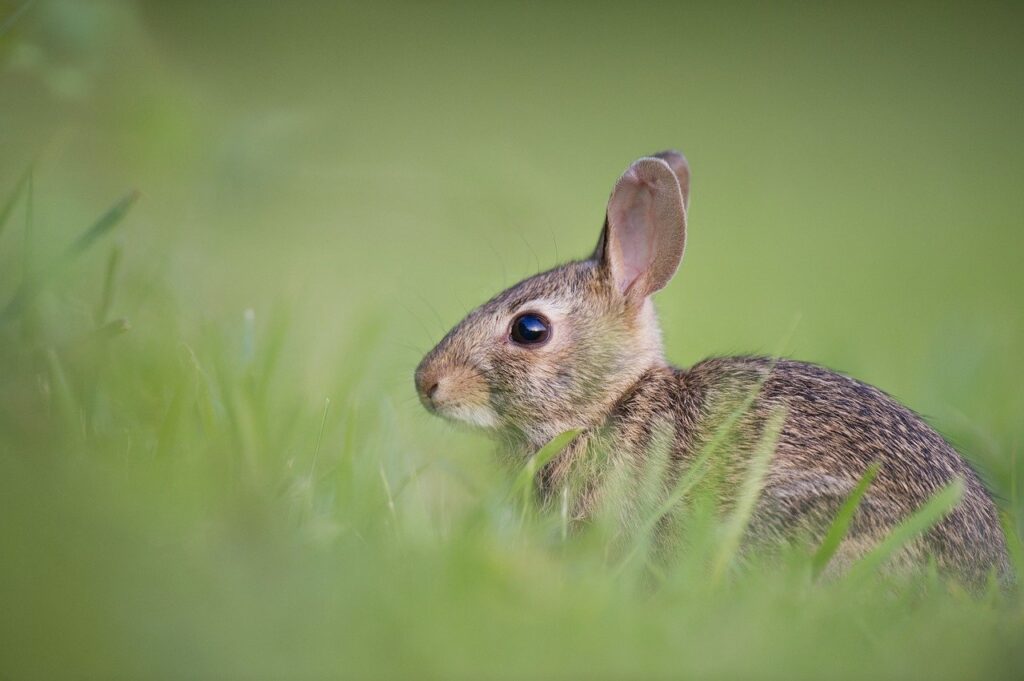 Watching a rattlesnake hunt is fast, exhilarating, and even scary. But what do they eat exactly and how big can their prey be? Do rattlesnakes eat rabbits?

Rattlesnakes do eat rabbits as well as rodents of various sizes. They also occasionally eat insects and other reptile species. Because rattlesnakes are pit vipers, they have heat-sensing organs inside their eyes that allow them to “see” heat signatures off of their prey.

If you’re wondering how else rattlesnakes hunt, their behavior, or where they reside, then continue reading this article!

We will answer those questions and talk about how rattlesnakes use their unique abilities to take down a variety of prey, including rabbits.

Rodents are the main food staple for a rattlesnake and that usually means rats, mice, and other small animals. Rabbits may be a bit too large for most rattlesnakes to eat, but they’ll certainly take a snap at them if they get the chance.

Baby rabbits or small ones would be easier targets, so if a rattlesnake does go after a rabbit, they would prefer a smaller, easier target.

The poison from a bite will almost certainly kill any rabbit that gets bitten, but some of them will be a bit too large for a snake to swallow whole.

And for sure if you find a rabbit that has been bitten, cooking, and eating it could be questionable!

But can you eat a rabbit that has been bitten? Luckily, in a recent article, I cover how to know, when to take a chance, and some of the other factors to consider before making that rabbit stew.

Just click that link to read it on my site.

They’re also quick animals that are very aware of their surroundings. A rabbit will have a better shot at escaping or fighting back if a rattlesnake makes a move. Sometimes the snake wins, sometimes the rabbit wins!

The video below shows an interaction between a rabbit and a rattlesnake.

Not every conflict will turn out the same way, but this is a real-life example of what can happen when these two animals fight each other.

If your family has a pet rabbit that is usually kept outside, here are some things you can do to protect them from predators. It’s best to keep your rabbits outside in the daytime in order to lower the risk of predators, like snakes. Rabbits can die from shock from seeing a snake, fox, or cat.

If the rabbit has been domesticated, it will not have the survival skills nor instincts needed to protect itself. There will also need to be a sturdy hutch in the yard to keep rabbits indoors with proper care and foundations to keep snakes and other predators away.

A Rabbit’s Self Defense

Although rattlesnakes have many advantages over their prey, rabbits have a few tricks as well. They are far from defenseless and will often sense a snake long before it gets close enough to strike.

Rabbits have highly evolved senses that serve as an early warning for them. They have wonderful senses of sight, hearing, and smell. They also have powerful legs that enable them to make a quick getaway. Wild rabbits also live in groups, so they have the advantage of a watchful community. When one rabbit sense danger, all of them can run away. Source

How A Rattlesnake Hunts

The main diet of rattlesnakes is rats, mice, birds, rabbits, and other reptiles such as frogs and lizards. Being pit vipers, a rattlesnake is able to sense the body heat of animals while nearby due to their heat-sensing organs in the eyes. Hunting at night poses no problems as they can still accurately latch onto their prey because their body heat is warmer at this time.

The rattlesnake hunting technique is called “ambush predation” as they lay waiting for the mammal to be in range and then strike forward, latching their venomous fangs into the skin. Source

In order to capture prey, a rattlesnake has to strike fast in order to inject the venom into the animal. The amount of time a rattlesnake takes to seize prey is only a half-second. Using their deadly fangs, the venom pierces the skin of the prey and immediately paralyzes it.

Rattlesnakes will then swallow their food whole, retreating to the den to enjoy their meal safely and quietly. The meal for a rattlesnake can last them a long time. Most of them will only eat once every two weeks. They will appear sluggish during the digestion period. Source

The following video shows how a rattlesnake hunts:

What’s fascinating is how the rattlesnake already knows when to lie down due to its Jacobson organs, also known as vomeronasal organs.

The organs were named after the discovery of Danish anatomist, Ludvig Levin Jacobson in 1811. These are organs of chemoreception that are part of an olfactory system that is found in amphibians, other reptiles, and mammals. The Jacobson organs give an animal a heightened sense of smell to locate prey.

The Jacobson organs are found on the roof of the rattlesnake’s mouth though people are prone to think that all snakes smell with their tongues.

Snakes who are “sniffing” may open their mouths wide to expose these organs to the open air. The rattlesnake is able to pick up “scent particles” on their tongue which flow back to Jacobson’s organs.

The scent particles or sensory cells are found within the main nasal chamber used to detect heavy moisture-borne odor particles.

This is how the rattlesnakes see the body heat of prey. Other mammals initiate what’s called a flehmen response which is a behavior where the animal releases or recognizes pheromones and hormones. This is performed by the mouth opening and curling the upper lip when inhaling.

Particles attach to parts of the tongue and fluids mix together inside the mouth of the snake. When these particles reach Jacobson’s organ, some chemical compounds cause sensory messages to be sent to the brain.

The process of communication via chemical messages is also used for sexual activity between the same species.

This helps snakes keep track of their prey as well. According to evidence, Jacobson’s organ may be involved in detecting chemical signals that are in relation to both aggression and territorial behavior. Source

This extraordinary sense gives snakes an advantage over their prey. When they can smell and sense their presence, they will be able to plan an attack more easily and more effectively.

Image by Pexels from Pixabay