Rattlesnakes are one of the most feared animals in the wild, but they have vulnerabilities as well. For instance, they have a high mortality rate from birth to the first year. of their life. But how many baby rattlesnakes survive?

Only 15-20% of baby rattlesnakes make it through their first year of life. They are hunted by a variety of birds and small mammals and form the principal diet of some other snakes including kingsnakes. Rattlesnakes are also vulnerable to the effects of cold weather and urbanization.

Even after they have matured to adulthood, rattlesnakes continue to be hunted, with only a very small number living out their full 25-year lifespan. Here’s a quick look at all of the causes of these low survival rates.

Baby rattlesnakes are known and feared for their venomous bite and their stealthy nature.

They strike quickly and aggressively when they are cornered or surprised. However, rattlesnakes in general (and baby rattlesnakes specifically) have many weaknesses that contribute to the astonishingly low number of rattlesnakes that make it to adulthood.

One of the primary weaknesses of a baby rattlesnake is the cold.

Without warm blood to keep them alive in the colder months, the biggest rattlesnake killer is the winter. The worst rattlesnake survival rates come during years with cooler and wetter summers. The cool summers delay the birth of rattlesnakes, which means that they are younger and weaker by the time winter comes.

Of the 10-20 rattlesnakes born in a litter, the majority of them will be killed by the cold. To mitigate this threat, baby rattlesnakes group together to share warmth and hibernate through the winter. 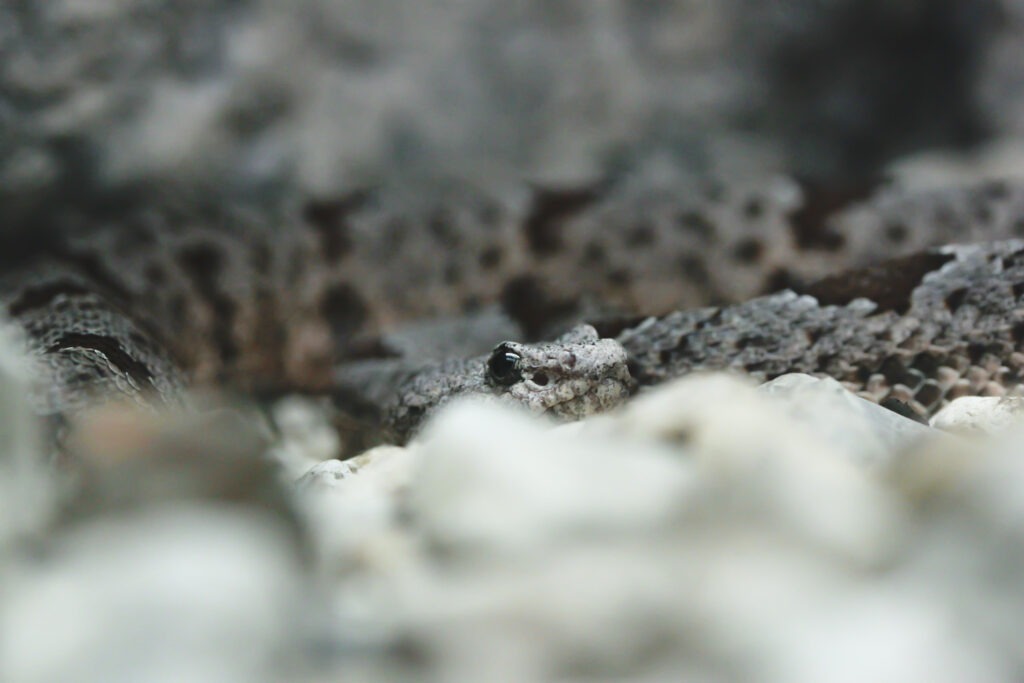 Another natural weakness of the rattlesnake is its feeding habits. Mice and other rodents brought by towns and cities form their primary diet, which forces rattlesnakes closer to humans to find their food.

Because of the fear that humans have of these serpents, they are often killed on sight.

Furthermore, snakes (especially young ones) are vulnerable while they are eating. They are slowed down when they are digesting, which can often lead to them being hunted themselves.

Though you might not expect it, one other weakness of a rattlesnake is its rattling tail.

While the tail might do its job warning other animals away, it can be a death sentence for a rattlesnake near humans. Most of the time, humans won’t notice a rattlesnake until it rattles, drawing attention and sometimes a bullet.

Baby rattlesnakes grow their rattles just after their first shedding, making it easy for humans to recognize them as a threat.

Despite their venomous bite and their other defense mechanisms, baby rattlesnakes are vulnerable to many different kinds of animals.

Just about anything can eat a baby rattlesnake, including:

Hungry older rattlesnakes can even cannibalize baby rattlesnakes when food is scarce. Though few of these animals specifically target rattlesnakes, all of them are pretty capable of voiding a young snake’s bite and finding a tasty meal. 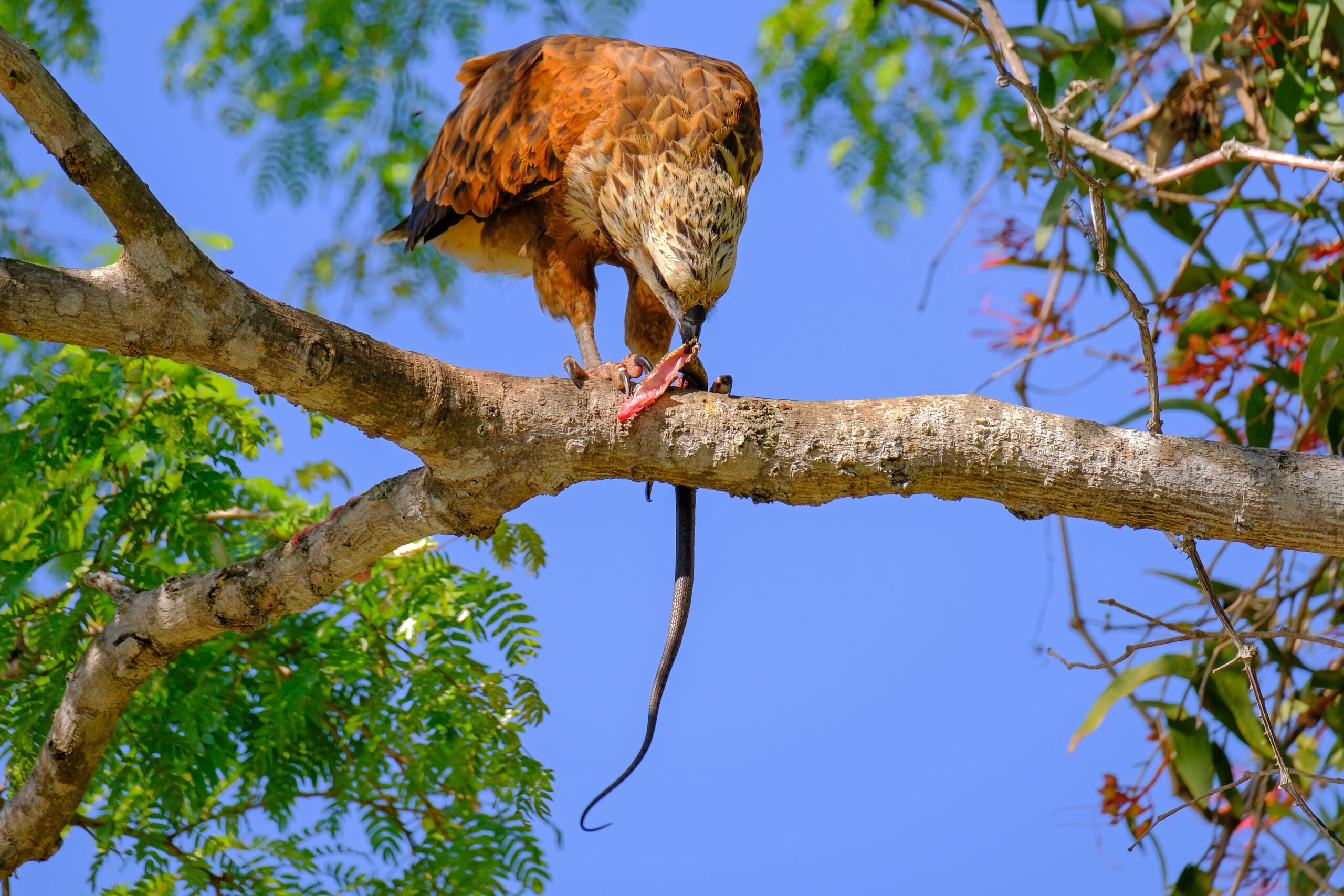 Once a rattlesnake is grown, they are still prey for many animals, especially birds.

Hawks, turkeys, kingfishers, and coyotes are notorious rattlesnake hunters. Birds especially have very fast reaction times and can avoid a rattlesnake’s strike, often dispatching the snake with their protected beaks.

A bird’s main method for hunting rattlesnakes, however, is to simply swoop down from above and carry the snake to a tree to eat it.

Snakes rely entirely upon the ground to support their bodies, and cannot get enough power to strike past a bird’s talons to defend themselves once they are caught.

Birds of prey are a huge threat to any rattlesnake caught out of its den. However, the worst rattlesnake killer (aside from humans) is probably the kingsnake. Kingsnakes hunt rattlesnakes aggressively, as clearing rattlesnakes not only provides a tasty meal for the kingsnake but also decreases the competition for other types of prey.

Kingsnakes are immune to rattlesnake venom, giving them the ability to clear out rattlesnake dens without much risk.

Though most larger mammals stay clear of rattlesnakes, they still pose a huge danger to the reptiles. Young rattlesnakes are often trampled by animals that may see them as a threat, even if it’s just by accident. Whether their habitat is in the wild or near a city, rattlesnakes face danger everywhere.

Another danger to rattlesnakes is increasing urbanization.

As habitats are destroyed, rattlesnakes lose a lot of their hunting ground. Rattlesnakes only need to eat about once a week to stay healthy but even that low frequency can be a serious challenge for a young rattlesnake. Their small size means that they can be easily outweighed by their prey, and their variety of predators increases the likelihood that they will run into something that hunts them.

Unlike some other animals that humans tolerate, snakes are actively exterminated from farms and houses.

Rattlesnakes are also severely threatened by roads, not having any way to save themselves if they try to cross one at the wrong time. By far, their best defense is to stay out of sight of humans and other predators if they want to make it through their first year of life. Once they have grown a little, the number of threats goes down a lot

Rattlesnakes use their camouflaged scales to blend into their surroundings while they are hunting, as their strongest tool is that of surprise. In increasingly urban environments, hunting becomes quite the challenge as their prey can spot the snake and can then easily avoid it.

Snakes lack the energy or stamina to chase down their prey, and once spotted they will usually give up the chase to conserve the energy that might be used on a hopeless strike. Because of this, if an animal like a squirrel spots a snake hunting it, it will wave its tail at the snake and let it know that it has been spotted.

The rattlesnake will then be forced to find new prey, having lost the element of surprise.

Despite the many threats that rattlesnakes face and the relatively few numbers that survive to adulthood, rattlesnake populations have remained fairly stable. Whether it will stay that way or not in the future years remains to be seen.

Rattlesnakes are quite possibly one of the least desirable pests you could find on your property. They can be tough to spot and they have deadly venom. If you haven't seen one yet, the best thing to...