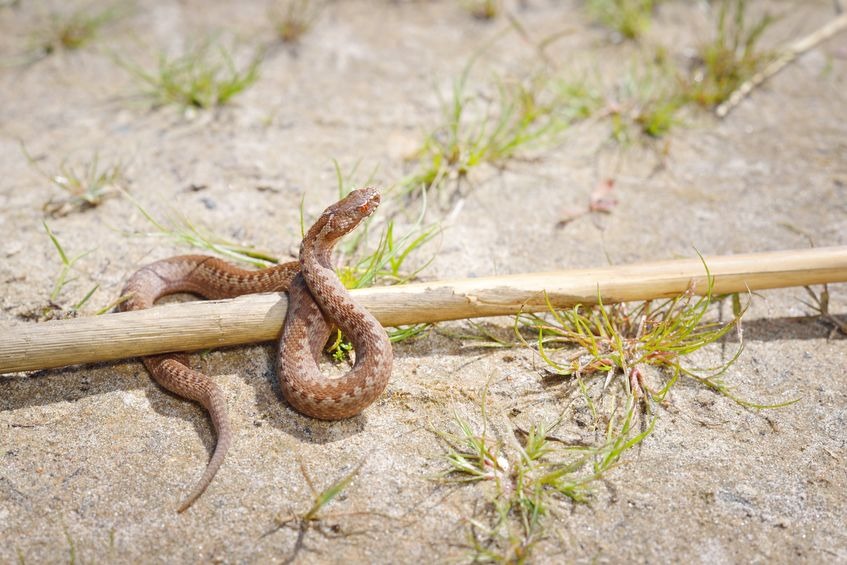 In general, rattlesnakes stay within two miles of their den, but in some areas, they can travel up to 5 miles away during the warmer months. So when a baby rattlesnake is observed, the den is not necessarily in the immediate vicinity.

But how far baby rattlesnakes travel away from their den does sometimes depend on their location and specific breed.

How Long Do Baby Rattlesnakes Stay With Their Mom?

Rattlesnake babies stay with the mother until their first shed, which is usually a week after they are born. After that, they travel out to find their own home range.

Rattlesnakes actually give birth to live babies, not eggs.

In general, once a rattlesnake finds a den, they use that as a homing den and stay within two miles of that den. Baby rattlesnakes have yet to find a den, so they often travel from home searching for a good den to keep warm in the winter.

This den is typically found naturally. Underground holes, stacks of wood, and piles of rocks are popular den sites for rattlesnakes. They can usually find one in a natural setting but may set it up in a backyard if the conditions are right. However, it may take a baby rattlesnake a while to figure out what will serve as a good den.

This means that the baby rattlesnake may wander for quite a while before finding a new home.

Everything that the new rattlesnake finds will be noted, and the rattlesnake will search for a location that provides adequate food and shelter. The baby rattlesnake can travel up to 5 miles away from its original den before finding a new home.

While searching for a new den, the baby rattlesnake may use temporary shelters to take rest. These can range from holes in the ground to household shelters such as shoes or outdoor toys. The baby snake is relatively new and may not realize the dangers of these temporary shelters yet. 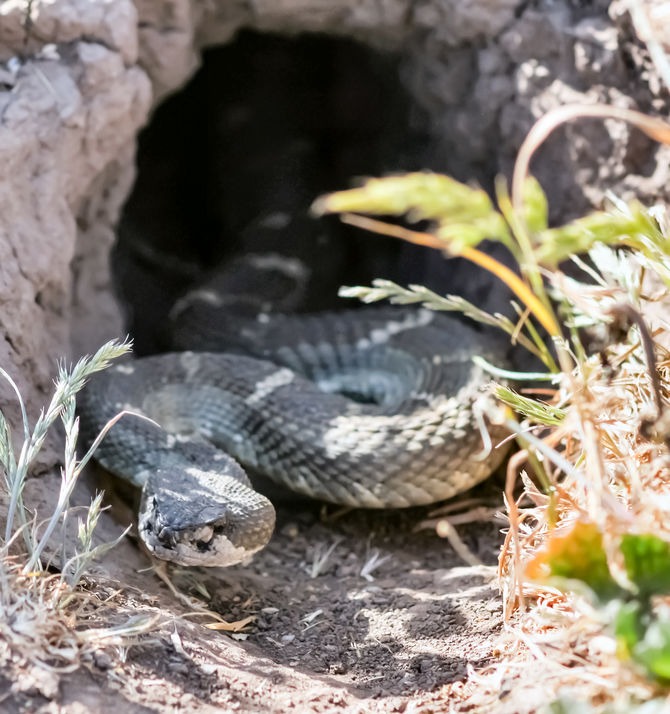 How Do Baby Rattlesnakes Pick a New Den?

In warmer climates there is not as big of a need for a permanent den, so rattlesnakes might spend longer traveling and looking for the ideal place to settle down that has food and sunspots. In areas that get very cold, rattlesnakes will need to find adequate shelter sooner and so they may not travel as far.

So, Location matters when it comes to how far rattlesnakes travel.

If conditions are too harsh, they may even return to their original den to find warmth with extended family members. This is because snakes are cold-blooded, so they need to stay in temperatures that are well regulated and not too extreme.

The den that the snake finds must be deep enough in the ground to escape extreme temperatures. Snakes can perish in temperatures that are too cold, or be woken up too early in the season if there is an unusually warm day. They’re very sensitive to heat fluctuations.

How Does the Breed of Rattlesnake Affect the Location of the Den?

Rattlesnake is used as a general term in this article, but several different breeds make a difference in the rattlesnake species, their migration techniques, and the distance they travel.

This is the most common rattlesnake in North America. This rattlesnake is found typically in the Eastern half of the United States. This specific breed typically doesn’t travel more than 0.5-1 mile away from their den.

Prairie Rattlesnakes are found, as the name suggests, in more prairie-like biomes. This specific type of rattlesnake has been known to return to the same den every winter, which is inhabited by family members of the snake. Because these snakes return to the same home den year after year, they don’t migrate very far away in the warmer months. They typically are away in the spring and return in the winter to hibernate.

These rattlesnakes have a range of around 1 to 2 kilometers from their den. They migrate away from their den in the Spring but return in the Fall.

Once the baby rattlesnake has become an adult, they typically have a well-established den that they can consistently come back to.

This is their home territory that they internally know how to find. Rattlesnakes are not territorial and will not fight any other creature for the territory, but they will stay within that area unless they need to travel away for specific reasons.

These rattlesnakes can travel for 5-6 miles searching for a future mate.

Adults typically give birth to their offspring in late Summer to early fall, around the August to September range. On average, they give birth once every two years. From there, they care for their offspring for a week or two, and then the babies are released on their own to start the cycle over again and to migrate and find their own den.

When the topic comes to rattlesnakes, typically people want to know how to avoid them and to remain safe from them.

Typically, because baby rattlesnakes are exploring and trying to find a den and a safe place to inhabit, the concern of the nearby den isn’t a major issue. Furthermore, if you want to prevent the baby from finding a new den in the area close to you, you should proof your yard to make it not super snake friendly.

This means getting rid of any small rocks or crevices that the snake would find desirable and potentially using scents like smoke, cinnamon, or lime.

link to Should I Kill a Baby Rattlesnake? (Kill or Scare Away)

Don't get me wrong, encountering a rattlesnake can be scary, even if it's just a baby. Even though you might want to react on instinct and attack or run away from a snake, you need to calm down and...

Rattlesnakes are one of the most feared animals in the wild, but they have vulnerabilities as well. For instance, they have a high mortality rate from birth to the first year. of their life. But how...